I learned many valuable skills growing up, but cooking was not one of them. Most of my early attempts at feeding myself involved frozen burritos and tater tots, both of which were usually still cold in the middle because who has that kind of time? If I really wanted to go all out, I would stick some American cheese slices inside a flour tortilla and microwave the whole mess to make a really sad quesadilla. It was awful, but it was food. Kind of.

Look, Dad, I made fish sticks. They’re burned on the outside, but they’re frozen on the inside, so it balances out.

In college, my cooking skills advanced to the point where I ruined two microwaves.

One was at my parents house when I misread the cooking times on a frozen dinner box. Instead of reading the microwave time of around 4 minutes, I punched in the 20 minute oven cook time. You would have thought the idea of nuking something that long would be a big red flag to re-read the box. It was not. I thought it was odd, but surely these people knew what they were doing. The good news is that the microwave still worked after this. The bad news is that it and everything cooked in it smelled like burnt failure for the rest of its life.

The second was trying to heat something up in a stainless travel mug in my roommate’s microwave. Having experience ruining microwaves at this point, I (incorrectly) figured there would be warning sparks to let me know something was about to go wrong. I had good intentions of stopping it in time. No sparks, all boom.

One Step Forward, Two Steps Back

It wasn’t until after college when I moved in with my southern-born, home-cooking future spouse that I got a lot more interested in cooking and baking. I was also introduced to Alton Brown’s show Good Eats, which made cooking look like a slow, logical science. This appealed to my software engineer brain and made it seem like a simple system within reach. But something was still going terribly wrong.

I was now finding cooking to be overwhelming and panic-inducing. Just finding a recipe that looked good for a main dish was tedious enough – analysis paralysis and all that. Now repeat the process for sides that will hopefully pair well, reread the recipes to build a grocery list, shop, and find time during the week to cook it before it all spoils. Just the process of picking the meal left me mentally and physically drained.

The worst part, though, was trying to time it all. Cook until the onions are lightly golden? So… what, is that 3 minutes or 20? How much time do I have to stir that other pot? How the hell is all of this supposed to finish at the same time? I don’t know how long any of this will take. Ingredient A is burning because Ingredient B wasn’t chopped and ready to go in since I was too flustered over Ingredient C. Inevitably the result would be simultaneously cold and hot and burnt and undercooked. By the end of the meal, I’d feel like I had just completed an Ironman Triathlon. And I don’t mean that in a “great sense of accomplishment” way. I mean that in a “I can’t breathe, my heart rate is in the red, and need a few days to recover” way. Screw this.

– Bob Wiley (Bill Murray in What About Bob?)

An Oil Shimmer of Hope

I had written off the idea that I would ever be able to cook anything except pasta, but something had to give. Our careers and commutes ate up most of the day, and we spent a lot of money on convenient processed foods and restaurants. It was a bad time for our health and our bank accounts. Eventually a combination of frustration, desperation, and laziness led us to those meal kit delivery services that are now everywhere. The concept sounded fantastic, but I resisted the idea for a long time for two reasons – my ego and my thrifty nature.

By signing up for a service that promised to do almost everything but make food hot and put it in my face, I felt like a failure. I’m a friggen adult and should be able to prepare a friggen meal without having to pay an incompetence tax. Also, I am the saver in my marriage. It can be difficult to wrestle a dollar away from me, so it felt like I was being punished twice. Thankfully, I married an easy-going spender that balances me out. The argument that we’d just be swapping restaurant dollars for meal kit dollars also helped. One expense I didn’t like replaced another. Fair enough, so we signed up. Specifics of which services I tried can be found below in Resources.

All the bullshit that made me hate cooking was gone. I didn’t have to worry about picking recipes, pairing flavors, shopping, measuring, and timing the various parts of the meal. Everything is prepped and ready. All I have to do was follow a recipe card three times a week and 20-45 minutes later I was able to claim kitchen victory.

By removing the obstacles, I was able to really focus on the actual cooking part of the process for the first time. Patterns emerged across recipes and more and more concepts began to click. This is a pan sauce. This is mise en place. This is sear, sauté, and simmer. This is how to make kale and cauliflower edible. Also, the timing of everything is clearly written out. It is easy to understand how long things cook, when to start on the next piece, and what to prep while waiting. My heart rate was finally in the green through a whole meal. These services were my training wheels – just letting me learn how to ride without having to stress about the rest.

There was another benefit. Three times a week, every week, the concepts of cooking and flavor were being reinforced, and a new habit was forming. Behavior change can be simplified and accelerated if it is implemented a little bit at a time. All I have to do is show up, pull a bag out of the fridge, and follow some really clear steps. I am no longer being asked to win the Tour de France, but just pedal down to the end of the street and back. Cooking multiple times a week became the expectation, not an exception.

Today I’m not claiming to be an acclaimed chef in a Michelin star restaurant, but I definitely impress the hell out of myself. We haven’t cancelled our meal delivery subscription, but it is on hold for a rainy/lazy/busy week while I inch the training wheels a little bit higher. And in a very real way, I am still using the service.

The recipe cards for many of these services are freely available on their sites. This means instead of picking three recipes for delivery, I can just download the recipe card, plan our weekend grocery run, and prep those meals myself. Not all of the ingredient quantities are specified, particularly with some of the pre-made sauces, but I feel confident enough to guess on what they might be. Even if I’m wrong it still tastes good, and maybe more importantly, it’s fun. I’ve even been able to go off-script and make up new meals that are still very edible.

Thanks to generous new customer promotional offers, my inner miser cracked open the wallet and tried a few different companies. I started with Blue Apron and Hello Fresh, and spent a couple of months with each of these services. Recipes from Blue Apron had a good variety in both flavors and required cooking skills. Hello Fresh recipes were easier to make and had a lot of of simple but delicious meals. 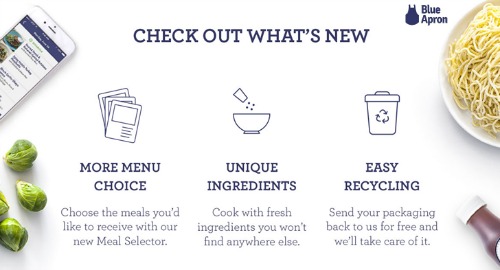 Both services are good, but I was looking for something more in line with our family’s tastes and lifestyle. Specifically, I want an emphasis on organic and sustainably raised ingredients, international flavors, and less reliance on simple carbs as the bulk of the meal. I found all of these in Sun Basket, typically choosing meals labeled Paleo, Mediterranean, or Vegetarian.

Even though the listed price per serving is higher than some of the other companies, portions seem to be bigger, leaving us with a lot more leftovers. We typically get 4 servings out of a 2 serving kit, which makes the actual cost closer to $6 per serving.

* Prices based on 3 meals a week for 2 people as of May 2019
** We have found that each 2-serving Sun Basket kit actually makes 3-4 servings for us. Your mileage may vary.

Better By One is an ongoing pursuit for financial independence, personal growth, and a more fulfilling life.

The goal is not to be richer than our neighbor or faster than the runner near us. We are only trying to be better than we were yesterday. Better by one percent, one dollar, one step in the right direction.